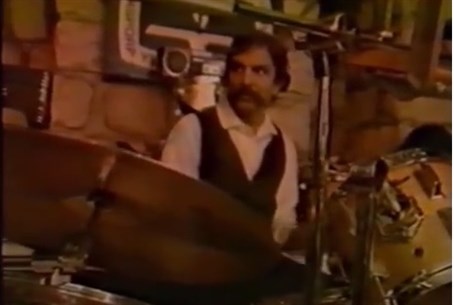 Thousands of people will visit the Tomb of King David and the Mount Zion neighborhood of Jerusalem for the Jewish festival of Shavuot, starting this Tuesday afternoon.

A tidbit of local lore that many visitors may not know is that Artimus Pyle, drummer of the celebrated American rock band Lynyrd Skynyrd, moved to Jerusalem to live and study in the neighborhood for about three years in the 1980s.

Rabbi Avraham Goldstein of the Diaspora Yeshiva spoke with Arutz Sheva about the connection on Tuesday, just before the beginning of the Shavuot holiday.

“He wasn’t Jewish, but I feel the Diaspora Yeshiva attracts every type of neshama [soul],” he stated. “King David prayed about everyone. The Psalms are about Jews and non-Jews, righteous and non-righteous. Also, the friends that Artimus came with were Jewish and were inspired.”

For a full interview with Rabbi Goldstein including his explanations of the history of King David’s Tomb download the podcast by clicking here.

The rabbi described how Pyle left one of his drum sets as a donation to the yeshiva, which for years was used by local musicians on the campus.

As for Pyle personally, an old promotional video for the Diaspora Yeshiva was recently posted on the YouTube internet video-sharing site which features an interview with the rock star.

“This is the most incredible bunch of men I’ve ever known in my life,” the drummer is shown saying in an area known as Assaf’s Cave. “They are honest beyond reproach and it’s a pleasure for me to be here,” Pyle states in the film clip.

Later in 2006, he released a song entitled I Live in Jerusalem on a solo album.

Rabbi Goldstein also noted that a member of the band KISS also once stopped by the yeshiva in the past, as did singer-songwriter Bob Dylan. He spoke of the 1970s period when the Diaspora Yeshiva Band became one of the first well-known groups to fuse Jewish traditional music with modern popular rock.

The rabbi described Mount Zion as a destination for spiritual seekers before the Six Day War of 1967, in lieu of access to the Western Wall which until then was under Jordanian occupation.

Today, thousands are expected for Shavuot, and organizations are preparing food and accommodations for the masses who are expected to stay up studying all night, as is traditional on the holiday. Shavuot is considered both the birthday and date of passing for King David, giving the region extra significance.